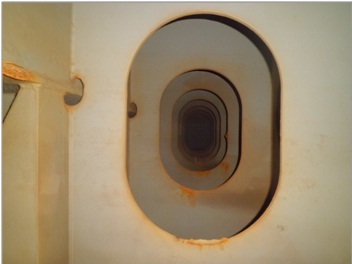 Steel surrounded me on all sides with barely a half-meter clearance in any direction, concentrating the hot, humid Indian Ocean air that had been forced in over the previous day. Twenty-five minutes and I was only halfway across the after peak water ballast tank that was twenty meters wide. As the sweat rolled down my back, I thought about the International Maritime Organization’s (IMO) and P&I Clubs’ increased emphasis on enclosed space safety. Perhaps they had a point; because, if I had a problem, it would be a long time before anyone got to me.

Much like Alice chasing the rabbit down its hole and winding up in Wonderland, once we dive into enclosed space entry, there’s a whole ’nother world. From regulations, drills and training to rescue equipment, risk analysis and atmosphere testing, there is enough information and skills on which to base an entire career. Unfortunately, as mariners, it’s only part of the job. A job that must be done safely, as the consequences can be dire.

Between 1998 and 2009, nearly 200 {enclosed space} casualties, including 96 fatalities – the majority of which were attributable to procedures not being followed!

According to Steve Clinch of the United Kingdom’s Marine Accident Investigation Branch (MAIB), this may be the tip of the iceberg. Since 2009, there have been a further 12 enclosed space accidents resulting in 10 fatalities and 7 injuries – in the MAIB database alone. Worldwide, the number of reported and unreported incidents is expected to be far greater.

Virtually all the casualties of enclosed space accidents are the result of atmosphere deficiencies. Whether due to a lack of oxygen or toxicity due to carbon monoxide, hydrocarbons, hydrogen sulfide or other substance, it is apparent the correct precautions are not being taken. Many enclosed space incidents continue to have multiple casualties due to rescuers not exercising due care before attempting the rescue.

Fortunately, there are a lot of stakeholders in the enclosed space entry arena, ranging from the lofty IMO to flag states to insurance companies to shipping companies and all the way down to the deck plates on the ship. While their stakes differ greatly, from the very personal life and limb of the seaman to the more nebulous reputation of a shipping company or flag state, the goal is the same – no incidents.

IMO’s Secretary General Koji Sekimizu has initiated an “Accident Zero” campaign with the initial goal of reducing all maritime casualties by half by 2015. Directly addressing enclosed space entry was IMO Resolution A.1050(27) Revised Recommendations for Entering Enclosed Spaces Aboard Ships, adopted in November 2011. On its own, this resolution provides a robust base for an enclosed space safety program.

Some of the other stakeholders aren’t so surprising, with shipping companies providing their crews guidance through their safety management systems (SMS). Other stakeholders are a little more surprising, with insurance companies or protection and indemnity (P&I) clubs providing excellent guidance on enclosed space safety (and a multitude of other subjects) through their Loss Prevention programs. One such resource is The Standard Club’s A Master’s Guide To : Enclosed Space Entry.

Squeezing my body through the web frame openings to get to this spot had required careful coordination of all limbs, hardhat and the gas meter slung over my shoulder. Not infrequently when performing these contortions, my exhaled breath triggered the low oxygen alarm on my multi-gas meter. The momentary rush of adrenaline when this happens is, I’m sure, only a taste of how a real emergency would feel.

An informal poll of senior merchant mariners recently revealed a lack of formal training in either Enclosed/Confined Space Entry and Rescue or Gas Free Engineering. While most companies provide training on their permit-to-work program or the use of gas meters, more specialized training is lacking.

Gas free engineering is a term more normally associated with the military. While certainly not training people to the level of a marine chemist, it does promote a feeling of confidence in equipment and procedures. Unfortunately, while some in the maritime industry do have this training, it is only those with specific military backgrounds.

Enclosed (or confined) space entry training is not uncommon, but as yet is not mandated. With the amendment to SOLAS III/19 requiring bi-monthly rescue drills, perhaps mandatory training is down the road? Until then, it is less likely that it will be taken voluntarily.

The Standard Club,  A Master’s Guide To : Enclosed Space Entry.