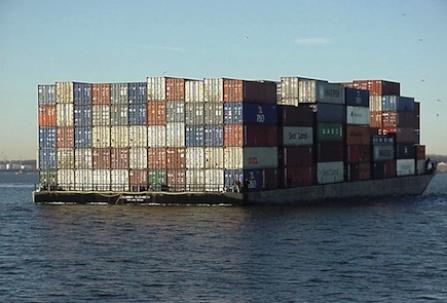 Ton-mile (noun) : A unit of freight transportation equivalent to a ton of freight moved one mile.

Why is the definition of ton-mile important?  And how does it relate to the Obama administration wasting energy?

A look at modes of transportation (road vs. rail vs. water) based on fuel efficiency is very enlightening.  A comparison of ton-miles per gallon by the Texas Transportation Institute shows the following :

A little mental arithmetic while looking at the above chart reveals that transporting by water is almost 4 times more efficient than by road.  For President Obama to say that our country’s energy policy needs, “…….a strategy that’s cleaner, cheaper, and full of new jobs…..” you’d think that promoting transportation by water would be a no-brainer.  If you thought that, unfortunately, you would be wrong.

In an era where fuel costs are skyrocketing, the European Union is promoting short-sea shipping and Australia is enacting legislation to promote domestic shipping, Obama’s budget for FY 2013 is calling for a “vessel user fee” to supplement an existing tax on fuel for commercial vessels.    This, in addition to the much-abused Harbor Maintenance Tax and accompanying Harbor Maintenance Trust Fund (trust us, it’s all been added to the General Fund and been spent) which has limited the growth of short-sea shipping.  At the same time he is hamstringing short-sea shipping, hundreds of billions of dollars are being pumped into highway infrastructure that the trucking industry intends to damage even faster by the use of heavier and heavier trucks.

With this attitude, it’s not surprising that the federal government is letting our waterways silt in, preventing existing vessels from loading down to their marks.  MARAD has participated in multiple studies between 1999 and 2005, all of which came  to the same conclusion that short-sea shipping would have numerous benefits to the country and economy.  It has gone so far as to commission ship design concepts and publicly hail the Marine Highway Initiative.  In the end, however, when the buck stops, it doesn’t stop with the maritime industry.  Time and time again, the maritime sector is passed over or given short shrift in transportation bills and budgets.  It appears that FY 2013 will give the maritime industry even less than before – not only will transportation budgets include next to nothing for promoting growth in the the maritime field, it will include new taxes for it.