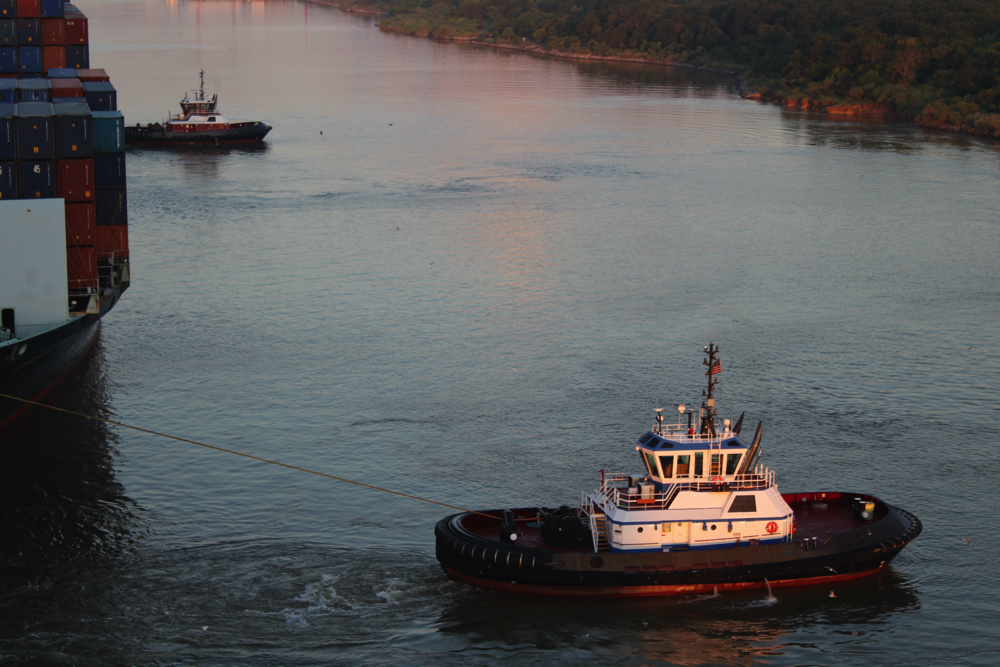 “Safety is not the absence of accidents.  Safety is the presence of capacity.”

There was a fresh breeze blowing over the port side.  We had just entered a relatively small harbor – actually my first time in this particular port.  With a tug made fast on the port shoulder and another made fast centerline aft, the maneuver to turn the vessel 180° had gone smoothly and the maneuver to dock starboard side to the berth commenced.

Our 2000-kilowatt bow thruster was thrusting 90% on the dock when the pilot said, “Let go the forward tug.”  And capacity went through my mind.

I felt the wind on my cheek and saw the “Hotel” flag standing straight out out of the corner of my eye.  Our anemometer wasn’t working, but the wind had built throughout the day as we waited for our berth to clear.  Answering the tightening in my gut, I suggested to the pilot that perhaps the bow thruster might not be able to hold the bow off in the breeze.

Dr. Conklin discusses capacity not as the ability of a container to hold something.  Rather he suggests that capacity is the ability to understand work – successful work – and how its resilience or recoverability handles normal failure as a function of operational variability.  And, in our case, the concern was the potential for something to fail – the bow thruster or a tug line were the parts of the system that came to mind as having potential for failure.  Accident reports that discuss such failures are plentiful.

A quick discussion with the pilot revealed that the after tug’s line configuration would not allow it to push, therefore the intent was to shift the forward tug back to the port quarter to push as we came alongside the cargo berth.  So, pushing capacity on the stern was at 0%, where pushing capacity on the bow was greater than 100% (tug + bow thruster) and, perhaps, better than 200%.  A good question to ask at this point might be, “How much pushing or pulling capacity might be required based on the wind strength?”

Rocks and Hard Places : How to Avoid Them was published by the North of England P&I Association (NEPIA) in 2015.  NEPIA faced potential claims with up to $100 million in liability due to groundings and hitting fixed and floating objects (FFO).  One of the chapters in the book discusses the planning for and use of tugs – including the formula below :

A good rough estimate for converting wind speed in knots to meters per second is to divide by 2.  Therefore, with the wind at ~20-22 knots, V = 10 m/s.

A or longitudinal wind area can be roughly estimated by multiplying the freeboard by the length of the ship.  Having a loading program onboard for stability calculations, a more exact figure is available.  In our case, it was 7000m2.

As can be seen, total bollard pull required to counteract a 20 knot breeze on the beam (within 30 degrees ahead or astern of perpendicular) is 56 MT.  Certainly, with a tug on either end, this would easily be achieved.  But what of our 2000 kilowatt bow thruster?

Based on 74 kilowatts = 1 ton force, our bow thruster has 27MT of force.  This is roughly half of the required amount.  The majority of our sail area is aft, where the tug (rated for 50MT of bollard pull) was made fast.  Between the tugs and bow thruster, we had adequate capacity to counter the wind setting the ship on the dock.  Had the wind been stronger – lets say 26 knots – the total bollard pull required would have increased to 94MT.  In such a case, the bow thruster alone would not have been adequate to control the bow.

Tug and thruster capacity was adequate for the current conditions, but reserve capacity was lacking.  Had any part of the system failed – the tug line back aft or the bow thruster forward or had the wind increased significantly, we might have had a hard landing, damaging dock and/or ship.  Capacity is about having resilience which allows a system to fail and recover without negative outcomes.

What’s the capacity in your system or operation today?  Is it adequate?  Do you have any reserve?

PreAccident Investigation Podcast – What the hell do you mean by “Capacity?”

North P&I – Rocks and Hard Places : How to Avoid Them