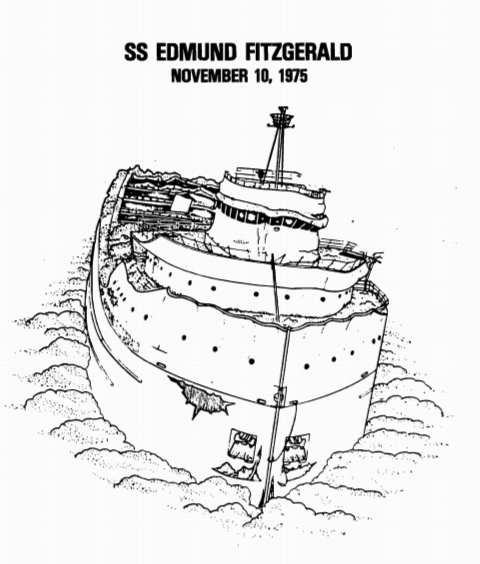 Forty-five years ago today, SS Edmund Fitzgerald foundered on Lake Superior in a November gale.  Immortalized in the Gordon Lightfoot song of the same name, the legend does live on.  Just this evening, our 3rd mate recounted hearing from a colleague on the Great Lakes of the gale warnings in effect for Eastern Lake Superior.  And, just like the Gordon Lightfoot song and the day Edmund Fitzgerald sank with all hands, the gales of November came early.

The Wreck of the Edmund Fitzgerald

The legend lives on from the Chippewa on down
Of the big lake they called Gitche Gumee
The lake, it is said, never gives up her dead
When the skies of November turn gloomy
With a load of iron ore twenty-six thousand tons more
Than the Edmund Fitzgerald weighed empty
That good ship and true was a bone to be chewed
When the gales of November came early

The ship was the pride of the American side
Coming back from some mill in Wisconsin
As the big freighters go, it was bigger than most
With a crew and good captain well seasoned
Concluding some terms with a couple of steel firms
When they left fully loaded for Cleveland
And later that night when the ship’s bell rang
Could it be the north wind they’d been feelin’?

The wind in the wires made a tattle-tale sound
And a wave broke over the railing
And every man knew, as the captain did too
T’was the witch of November come stealin’
The dawn came late and the breakfast had to wait
When the gales of November came slashin’
When afternoon came it was freezin’ rain
In the face of a hurricane west wind

When suppertime came, the old cook came on deck sayin’
“Fellas, it’s too rough to feed ya”
At seven PM, a main hatchway caved in, he said
“Fellas, it’s been good to know ya”
The captain wired in he had water comin’ in
And the good ship and crew was in peril
And later that night when his lights went outta sight
Came the wreck of the Edmund Fitzgerald

Does any one know where the love of God goes
When the waves turn the minutes to hours?
The searchers all say they’d have made Whitefish Bay
If they’d put fifteen more miles behind her
They might have split up or they might have capsized
They may have broke deep and took water
And all that remains is the faces and the names
Of the wives and the sons and the daughters

Lake Huron rolls, Superior sings
In the rooms of her ice-water mansion
Old Michigan steams like a young man’s dreams
The islands and bays are for sportsmen
And farther below Lake Ontario
Takes in what Lake Erie can send her
And the iron boats go as the mariners all know
With the gales of November remembered

In a musty old hall in Detroit they prayed
In the maritime sailors’ cathedral
The church bell chimed ’til it rang twenty-nine times
For each man on the Edmund Fitzgerald
The legend lives on from the Chippewa on down
Of the big lake they called Gitche Gumee
Superior, they said, never gives up her dead
When the gales of November come early

A number of recommendations were made to the U.S. Coast Guard, NOAA and ABS (American Bureau of Shipping).  Some of the more pertinent ones include :

“Require a means of detecting water in the cargo holds of a Great Lakes vessel so that her master will have an early indication of flooding and can take any necessary corrective action. (Class II, Priority Action) (M—78—21)”

“Amend 46 CFR 56.50—50 to require an effective bilge pumping system on Great Lakes bulk cargo vessels so that if the vessel has trim by the bow and is listing, water can be removed from any portion of the cargo hold. (Class II, Priority Action)”

“Require that the information supplied to the master of Great Lakes cargo vessels on loading and stability also include information on the vessel’s ability to survive flooding (e.g., trim and heel results after assumed damage) so that the master can take appropriate corrective action or formulate timely plans to effect crew evacuation. (Class II, Priority Action) (M—78—24)”

“Investigate, together with the U.S. Coast Guard, the effects that the deeper drafts permitted under the 1969, 1971, and 1973 amendments to the Great Lakes Load Line Regulations have had on the structural strength of Great Lakes bulk cargo vessels. Note any damage or bottom plating wear over the next 2 years caused by the ‘groundings’ of these vessels during loading, unloading, or navigation in restricted—depth waterways. Evaluate the effect this damage or wear might have on the structural strength of these vessels in a seaway, and jointly report the findings. (Class II, Priority Action) (M—78—15) (Issued March 23, 1978)”

The second recommendation that is similar to El Faro regards bilge alarms.  It sounds so simple to say, but forty years after the loss of Edmund Fitzgerald, El Faro’s crew had no way of determining if the holds were flooding without physically inspecting them.